Home | Web Design | Advertising | About us |

Kevin Ireson says: More recently I went back to find the name of the restaurant had been changed from Fiesta Mehicana to Fiesta Latina. It appears the new owner still does know what he is doing. It still remains a good place to have a meal and enjoy yourself on a fun night out in York. With good service and good food. There was also an offer on weekdays 2 4 1 cocktails. All you have to do is order 2 of the same cocktail and it came at the same price as 1 cocktail at the weekend.

Seated quickly by pleasant front of house staff. Asked about cocktails which were 2 4 1 on weekdays, as long as you ordered the same cocktail. French martinis and Singapore slings came quick. French martini 4/5 had a good flavour. Singapore Sling (gin sling) was a bit sweet could not get a gin flavour from it. 2/5 Cuba libra with Diet Coke was tasty we could taste Bacardi we think! 4/5 Mia tai was a long drink with lots of ice in a tulip glass surprisingly. It used rum triple sec orgeat grenadine and lime juice. A bit sweet for us but ok and a bit of a house recipe. 3/5

I (webmaster) have been going here for a number of years. This is a great place for a "do", like a birthday party, in my opinion. It has a relaxed atmosphere and good food. Some of the staff just need a bit of training on how to be a little more attentive. Yet, I guess in a Mexican place you can get away with shouting for service. So, perhaps it actually adds to the atmosphere.

On entry mind the step, it can be a bit hard to see because you are usual taken away by the decor as soon as you get in. Not what you would expect to find in a city of historic beauty really .. sombreros all over and the rooster behind the bar took my eye too, I have never seen anything quite like it. Atmosphere is the thing here. You get a load of it and its fun. I mean, they have a huge cock in the front room!.It is always fun asking your friends if they can see it as you enter. 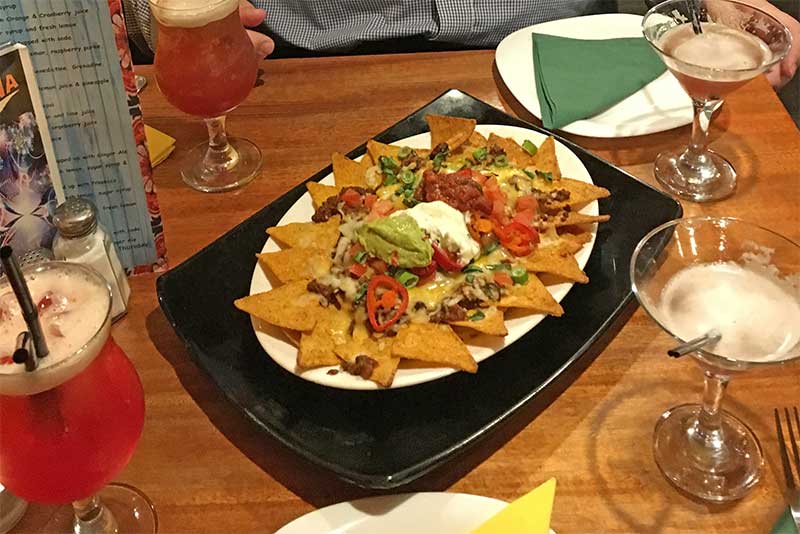 We had a pre starter of nachos with some chilli. Nachos with chilli carne carne came quick. Guacamole was bought in. Salsa home made and you could tell too good flavour. Sour cream was, well sour cream! Crispy and well cheesy with lots of salt. Spring onions and red chillies were good too. The chilli was tasty but not hot enough for me. Borlotti beans and chickpeas in too so fibre for you healthy folk! 3/5

These are triangular corn chips covered in cheese and some peppers and stuff for presentations (thank you to Neil the head chef for reminding me of what they were called) The salsa that we ordered with they were quite good. Not as spicy as I like but the fresh red chillis on top did have some bite. The actual chilli con carne that was on top was denfitly not hot enough. It was tasty and spicy made with borlotti beans and chickpeas too. But not enough chilli in the chilli. The quanity was good which is a bonus compared to the last owner. I mean how much does it cost to put a few more crisps and cheese on a plate.

Origionally before it changed hands I stated Only real downer about nachos here was quantity. Although it was a starter, there was not much in the way of quantity to really get stuck into. Maybe worth it to make sure they know 2 people are wanting to share the dish. 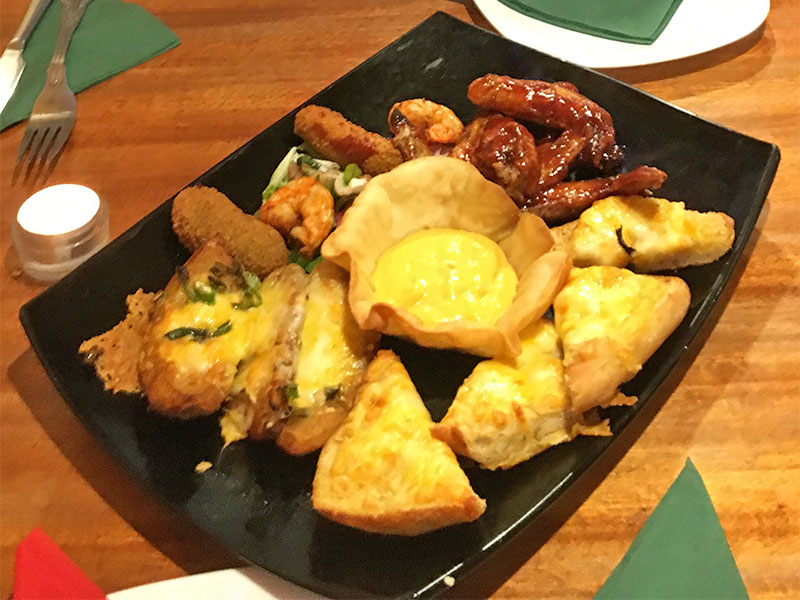 We had a sharing platter for 2. this is often a good way of trying out a new restaurant. It usually gives you a range of the staters on the menu. So you try them all out and decide which ones you like best.

Sharing starter was nice. Star of the plate was crisp coated chillies they were real crunchy and crisp with a slight bite so deseeded and filled with sour cream to counter the chilli heat but, not the flavour. 4 cheese on light toasted bread had reasonable flavour and texture but no brilliant. The 2 prawns were great. A little over cooked for me but David loved them. Potatoe skins were also good. Quite crisp skins full of cheese and a nice bit of potato on the inside. BBQ chicken wings were a wind up as there were 3 on a sharing platter for 2! But nice sticky sweet sauce and well cook through. Ate these last and they were still quite warm! 3.5/5 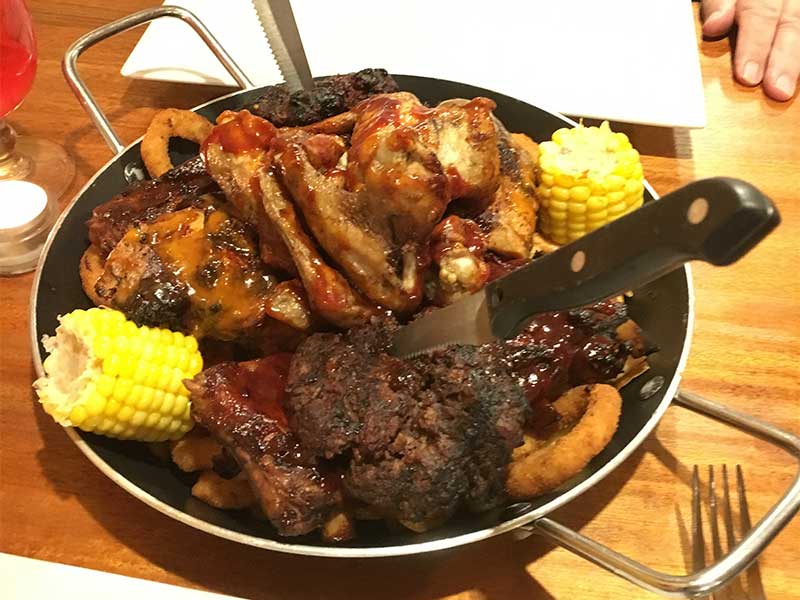 Main was a sharer also. Bit of everything. Ribs were succulent and juicy. Meat covered in a delightful sweet BBQ sauce fell of the bone. Chicken wings were in the same which was a bit of a shame as we were hoping for a taste of their voodoo sauce wings. Chicken breasts were their own version of jerk seasoning. Unique interesting flavour but quite dry and over cooked. Fries were also quite crispy and for anyone but me over cooked. Perhaps baked after frying? Onion rings were crispy breadcrumb coated with a real ring of onion in. That is a bonus compared to some other places in York. Corn on the cob was petite and may have been basted in butter but, had a distinctly frozen texture and flavour. Spending 12 years in Canada I can tell the difference if it isn't fresh. 3.5/5 but 4.5/5 for the ribs.

Service was good. Asked once for each course if it was good and each was. Fabrice the owner was always on hand and happy to talk about his food. Only gripe was we were offered very cold plates for the main course. When I told the owner, he quicklu replkaced them with plates he told us were "... very hot. Be careful you dont burn yourself!". Well done sir!

A while back beofree the new owner I said the following. This veiw remains the same really. The food is good .. I went for a burrito .. a pancake type thing full of spicy beef .. loved every bite. The texan friend I had with me (waves to Denny if he reads this) went for a choice of 2 different spicy dishes all of which we totally enjoyed. Being a with a Texan we had to get some jalapeno to go along with the Mexican food ... can say anything but if you like a certain je ne c'est qua in you spicy foods .. go for it.

The only word that springs to mind is yummy. I will be going back here soon. The head chef tells me they are trying to perfect a new chili dish which I look forward to with anticipation.

Beverley Stewart wrote in to tell us: I visited Fiesta Latina at nine months pregnant to try and induce labour with spicy food. Although the restaurant was very busy the staff were exceptional and I have raved about the service ever since! They immediately found somewhere for me to sit while waiting for a table and served with drinks until a table was available. The food was brilliant and again the service was totally on the ball; staff always watching to ensure no one was waiting for anything, bringing extra spoons in case you wanted to share desert with your partner (not that I did want to share mine!!) A truly memorable experience and one that I am looking forward to repeating particularly now I am able to sample the tequila!


Please mention Hotels in York website when you call. Thanks.

Opening Times:
530 until 10pm Sunday to Thursday
530 until 11pm Friday and Saturday