Home | Web Design | Advertising | About us |

Kevin Ireson says: This Italian restaurant and deli has been here for a long long time. I first went here for a meal with some business colleagues in 1997, which was quite good. I returned some years later and to be honest it was not a good night. Staff were arguing in the restaurant and the food was taking a back seat. However, longevity in the York restaurant scene means, it has got to be good.

Booked on a Thursday start of a bank holiday weekend. They were closed wed so left a message and they got back to me next day. Best slot available was 630 so we took it. Entered, found our way up the staircase and were seated quickly. Were given menus and half asked by the friendly staff about drinks.

Aperol spritz was available so we went for it. Not cheap but not extortionate prices for these. These came in good time and we ordered some olives to share. A small dish of olives, about 12 in total, arrived with 3 small slices of bread. Olives were in oil with a couple of slices of chilli which added to them. Green were a bit tasteless but the brown ones were a delight. The only bugbear I had was they charged about �4.00 for this which is an outrageous markup. But, They have to make some profit somewhere I guess.

Starters were 1 trio of bruschetta 1 cold anti pasti meat and cheese sharer (for 1) and a plate of their best prosciutto. We were hungry after all. My bruschetta were all good. Tuna mayo was a bit tame but the Tuscan bean and balsamic one was unique and good. Almost had a seafood flavour to it. The tomato basil and mozzarella was a treat even if somewhat unadventurous. 3/5

Sharing plate was all very present. 3.5/5 meats were all tasty. We had a Primativo red (Sicilian) went very nicely with them and the 4 bits of cheese. Took it all to another level. My special prosciutto ham was tasty. The wine raised this too. 4/5 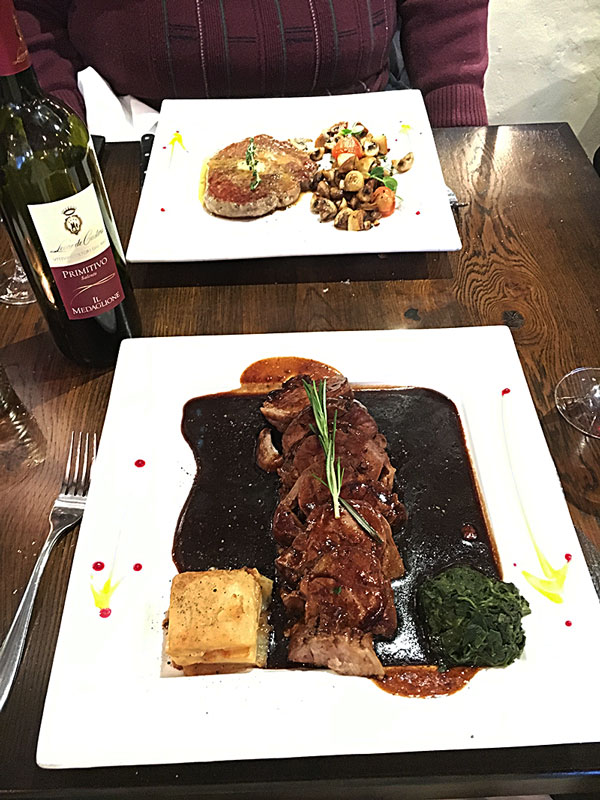 My main was slow cooked lamb rump in balsamic and honey jus with dauphinois. The meat was melt in the mouth. The dauphinois was cooked with some of the lambs dripping. We think as it really was tasty! The jus was quite light in flavour which meant it simply added to the flavour rather than overpowered them all. A real delight 4/5

Davids rib-eye steak was ordered medium rare. It came a bit over cooked and was a bit dry. It was well seasoned and tasted nicely of the thyme a sprig of which came with it. Chips were not over greasy, like thin roast potatoes really. Mushrooms and onions with it were also nice. 3/5

Lemonchello tiramisu was light, obviously made on site and tasted of lemon. Creamy delight to end. 3.5/5


Please mention Hotels in York website when you call. Thanks.